From the Ground Up: Activists and Activism in Edmonton. Season 3, Episode 6. 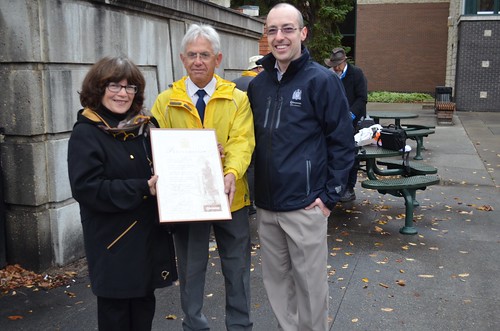 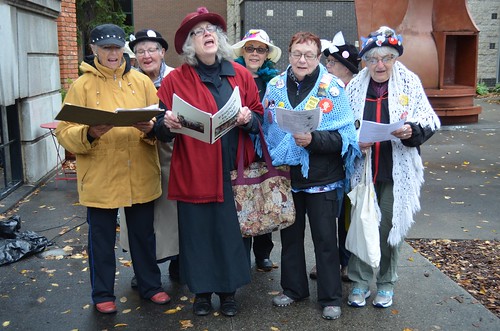 Some of Radical Citizen Media’s photographs appear in other publications.

The Raging Grannies perform their finale at the first annual Daughters Day celebration on September 1 in Churchill Square. Daughters Day has been established as a celebration of the lives and achievements of women, while raising awareness of human rights abuses against them. The Raging Grannies are a group of local women who regularly appear at events, singing songs that promote peace and social justice. (Edmonton Senior, October 2012)

On June 23, a group of senior citizens in Edmonton gathered outside of the Old Strathcona Farmers’ Market to protest Bill C-38. Also known as the “Omnibus Bill,” Bill C-38 was introduced by the federal Conservative government and passed in mid-June. The 400 page document makes changes to around 70 laws, streamlines environmental reviews, and raises the age to receive the Old Age Security to 67 from 65, for example).

Organized by the Seniors’ Action Liaison Team (S.A.L.T.), the group of around 50 were joined by people from other age groups, organizations, and political figures. Raging Granny Marilyn Gaa fired off a list of 16 things that bothered her concerning Bill C-38, before the group ripped into several of their politically satirical songs. Amongst Gaa’s grievances were “the cancellation of funding for environmental research; huge cutbacks to the CBC; restructuring the environmental assessment process; cuts and changes to employment insurance; and, massive layoffs in Environment Canada, national parks, Fisheries and Wildlife, and in food safety inspection.”

Linda Duncan, MP for Edmonton-Strathcona, also expressed concern over Bill C-38, referring to it as the “Ominous Bill” in that it is a sign of frightening things to come from the Harper government. “We have to recognize that this is just the beginning of Stephen Harper’s agenda,” she said. “This is not responsible development and they are not thinking about future generations or even the generations now.”

Similar sentiments were expressed by Rachel Notley, MLA for Edmonton-Strathcona. Notley discussed the impacts of Bill C-38 on a provincial level, such as the environment. “We don’t have to wait for the next election. The reality is that quite some time before the next election they start taking the temperature of the public and they start realizing when they’ve pushed it too far. We have the ability to tell them that they’ve pushed it too far. We can start right now to say that their agenda is not our agenda.”

Other organizations represented at the rally included the Council of Canadians, Public Interest Alberta, and the United Nurses of Alberta. After the formal speakers, members of the audience were invited to speak their minds at an open mic. Talk was made of similar rallies being held over the next while.

Some of Radical Citizen Media’s photos have been appearing in VUE Weekly.